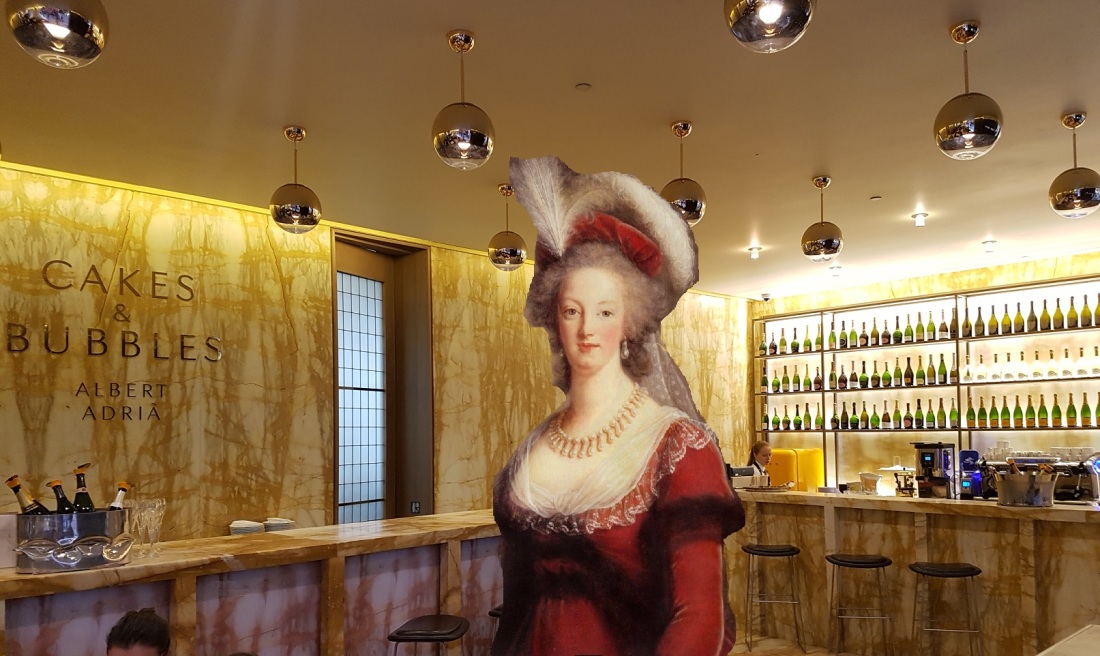 I find myself sat alone, drinking champagne in the window of a fancy hotel in Piccadilly Circus. Outside, people stop and peer through the window. I give them a half-wave as if to say ‘yes, it is me, the man who coaxes the dead back from the grave for potato dauphinoise’, but realistically I know they have no idea who I am, and why would they? Six blog entries in and my flat remains distinctly Oscar-free. There are those who would say ‘why would you have an Oscar? You know that just celebrates the film industry don’t you?’ or ‘seriously, have you even looked at the categories? Have you researched this at all?’, to which I would say ‘please, stop shattering my dreams’.

I think everybody suffers from self-doubt from time to time, the feeling of not being good enough, of being a fraud, of not being qualified to lead a space mission but you joked to a guy at a party that you were an astronaut and he thought you were being serious and things kind of snowballed from there and now you’re going on a solo mission to Mars that’s clearly going to be a disaster as you don’t even know how to open the bonnet of a car let alone pilot a multi-billion dollar spaceship but you don’t want to say anything because the nice old Commander in the hat called you ‘sport’ and you don’t want to let him down even though he’s pretty old and senile now and you kind of suspect he may have been one of the racist characters from Hidden Figures. We’ve all been there. Right now my self-worth and motivation is through the floor. The blog has not been the success I had once hoped. Every day my editor calls to angrily bark down the phone at me. Perhaps hiring a dog editor is part of the problem, but right now I need a win, a blog that rekindles my self-confidence and gives me back my belief in the importance of food reviewing. Hopefully this shall be that win.

Today I’ll be dining at Cakes & Bubbles. A recent opening within the Hotel Café Royal on Regent Street, it’s the first UK addition to the restaurant empire of Albert Adria. One of the creative forces behind elBulli, a five-time winner of the World’s Best Restaurant, Albert is also a former winner of the World’s Best Pastry Chef, so this restaurant, a dessert-themed café and bar, comes with high expectations.

My guest today is famed for her love of cake. Hated by the French population for her lavish spending in a time of financial ruin, she was famous for her utterance of ‘let them eat cake’ in response to learning that the peasants had no bread to eat, a phrase so markedly out of touch that it could have come from Iain Duncan Smith circa 2011 (#satire #lol #whatamIlike). There’s some historical debate as to whether she actually said it or not, but from there the rest is history, and she was later executed for high treason by French revolutionaries. I’m intrigued to see how she reflects on this now, and whether she feels any remorse for her actions, as Iain Duncan Smith should for his actions circa 1954-Present (#truthbombs #haveIdonethisalready?). My answer comes as the door swings open, and there she is.

“Let them eat caaaaaaaaaaaake!” Shouts Marie Antoinette, excitedly, as she waltzes in. “Take this,” she says, as she throws her coat at a member of staff and heads to my table.

She clicks her fingers at a passing waiter. “Waiter, your finest champagne, and hurry up” she says, brusquely, as she takes a seat.

“So, thankyou for joining me tod-”

“So, you review food?” Says Marie, interrupting. “What sort of career is that?”

“Well, it’s not actually my career, I just do this as a hobby.”

“So an amateur food critic?”

“Well, yes, for now, but Oscar season is approaching and-”

“I’ll be honest with you, I’ve read some of your work. You don’t seem to have the first idea how to describe food. Some of your descriptions are vague at best, and completely confusing at worst.”

“What are you talking about?” I say, as I have another sip of my champagne. It’s jam-packed with bubbles, like a diver with the bends, whilst the palate is surprisingly rich and buttery, like an Undercover Boss in a dairy farm accident.

“You’re wasting your time pursuing this, you need to give up,” says Marie.

“No more reviews,” she says, as she grabs my pen. The next moments pass in slow motion as she snaps it in half and I watch it fall to the floor.

“You’ll thank me later,” she says. “Waiter, we’re ready to order now,” she continues, as she dings a glass with her spoon to summon the waiter. I’m stunned, but maybe she’s right. After all, if you haven’t succeeded after six barely publicised WordPress blogs posted at irregular intervals over the course of the last 10 months, then maybe you never will. In some ways I feel a weight lifted off my shoulders, the pressure to heal the divisions of the world through describing spinach is gone. The world doesn’t need food reviewers, let alone one such as myself. I put my notepad back in my bag and allow the dream to quietly die.

“What can I get for you?” Says the waiter.

“We’ll have everything,” says Marie.

“One of everything, a great choice.”

“Madam, I would recommend maybe five to six dishes in total to share or else-“

“I said we’ll take everything,” says Marie, closing her menu and thrusting it into the chest of the waiter. “Chop chop!”

“Everything? Isn’t that a bit much?”

“You’re with royalty now!” She says. Shortly afterwards the dishes begin to arrive. We’re quickly surrounded by tray after tray stacked high with chocolate corks, eclairs, ‘After Eight’ marshmallows and the restaurant’s fabled cheesecake. Everybody is staring at us as we become citizens of our own personal pastry metropolis. I take a bite of the chocolate cork. It’s- No, my reviewing days are done now, I simply sit and enjoy the food. I’m at peace, relaxed and free of obligation, until I hear a noise from next to me.

“What do you mean you’re out of cake?!” Says a nearby diner, angrily.

“I’m sorry, madam, that lady over there bought everything,” says the waiter, apologetically.

“We came here to try your cake!” Says another diner, standing up. “Now you’re telling us that she has all of it? She’s never going to eat that much!”

“Perhaps she’d be willing to share with us?” Says another voice, providing a reasonable tone to the debate. “Excuse me, madam, would you allow us to share some of your cake?”

“Madam?” Says Marie, annoyed. “Peasant, you will address me as Your Majesty or you will not address me at all!”

“Who the hell are you?” Says another. By this point the whole restaurant is on its feet and surrounding our table. My sense of tranquillity is somewhat shattered by this.

“My name is Queen Mary Antoinette and I am your superior!”

“I think we should let them have some of our cake,” I whisper, trying to defuse the situation. “To quote somebody I once met, ‘let them eat cake’,” I say with a smile.

“I never said that!”

“I said f**k the peasants let them all die.”

“You know you really should meet Iain Duncan Smith, you two would have a lot to chat abou- you know what, now’s not the time.” (#oncetwicethreetimesasatirist) “Look, we have way too much here, there’s plenty for all of us.”

“Over my dead body! Guards, detain these peasants immediately!” Shouts Marie. There is baffled silence. “Guards! Guards! … Guards?” There is no response. I didn’t invite any guards as they weren’t celebrities.

“Get her!” Shouts the crowd. They surround her and grab her.

“Off with her head!” Shouts one member of the public, escalating things a lot quicker than I’d thought, as they throw her down over a counter. I stand, stunned and helpless. What am I to do with an angry mob who have been driven rabid by their desire to experience cake? Then I’m struck by an idea.

“Ladies and gentlemen! Stop this nonsense!” I say, as I take a stand upon a table. The crowd turn to face me as I grab a cheesecake from one of our trays and begin to devour it. “The cheesecake is a delight, a delicious trick of the mind that encases all of the sweet flavour of white chocolate with all of the savoury flavour of cheese in a confusingly tasty cheese-disguised package, leaving you questioning what exactly it is that you’re enjoying,” I say.

“What the- what is this?” Says a crowd member, confused. I grab a chocolate cork and consume it whole.

“The chocolate cork is not a cork at all, but a perfect mix of chocolate and coffee fondant all rolled within a delightfully light chocolate sponge!”

“Oh my god, I can taste it… but I’m not tasting it,” says a confused member of the mob, holding their temples. “What is this witchcraft?”

“The chocolate éclair with peanut praline is like the finest Snickers you’ve ever eaten, combining a lovely mix of textures from smooth chocolate to crunchy peanut in one tasty tube,” I shout. The mob unhand Marie as their rage is soothed by an emotional taste sensation. I watch as they all calmly take their seats and focus on me.

“Tell us tales of the carrot cake,” says one. I grab a carrot cake from my tray.

“The carrot cake has a sponge so delicate that it’s hard to believe they’ve managed to condense so much flavour into it, and like a bagel’s coffin it’s carried by cream cheese.”

The crowd break out into spontaneous applause. “Now please, help yourselves to cake,” I say, as I get down from the table. Marie, slightly shaken from nearly being executed in broad daylight in an upper-class café in 21st century London, rejoins me at my table.

“It looks like I was wrong,” says Marie. “Maybe you’re not so dreadful after all.”

“Excuse me, sir, that was amazing. How did you do that?” Says a waiter, approaching our table.

“I remembered what I’ve always known all along I guess,” I say with a shrug. “That food criticism is the most important profession in the world,” I say, as I throw down some cash, grab my coat and head for the door.

“But what about doctors and nurses? What about aid workers, farmers, teachers, scient-” they protest, but I block it out as the door closes behind me, my self-importance rekindled.

The most important profession in the entire world.

View all posts by Andy Ward